Say good-bye to the K-Cup blues and wake up singing with fresh Hallowed Grounds Coffee every day in your single cup brewer! That's right folks, we at Hallowed Grounds Coffee Roasterie of New Brighton, PA have the solution to your k-cup blues! You might not have realized you even had the k-cup blues, but if you are using a Kurieg or other similar one cup brewer, you are spending a fortune on those k-cups and that could have your wallet singing the blues! K-cups cost on averge 50 cents per cup which means that you are actually paying $32 for a pound of coffee! And you aren't getting fresh roasted coffee like you would from Hallowed Grounds either!

Everyone loves the convenience of the k-cup system, but since it brews so quickly it simply does not extract the flavor as well as other brewing methods. This means you are paying more and getting less flavor in your cup - leaving you singing those k-cup blues!

Our EZ cup spring loaded design brews a better cup of coffee and cuts your cost in half. Plus it gives you freedom of choice in brewing so you can experience the enlightenment of Hallowed Grounds coffee in every cup.

You can find the starter kit online which includes a half pound of our Signature Blend coffee for just $30 with FREE shipping or in store for only $25.

So, stop singing the k-cup blues and start singing praises every day as you start your day out right - with a cup of Hallowed Grounds coffee made with our EZ cup coffee brewing system.

This site uses Akismet to reduce spam. Learn how your comment data is processed. 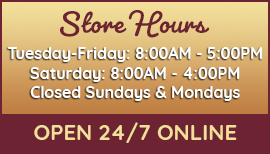